Biofiltration is a method capable of addressing both biological contaminants and arsenic contamination. Abandoned uranium mines have caused much of the water to exceed standard limits of both uranium and arsenic levels (Gies, 2016). These heavy metals are dangerous in consumption over Major Contamination Levels (MCL) of 10 µg/L for arsenic and 30 µg/L for uranium, as determined by the EPA in 2006 (Gies, 2016) .

Because current research has not found a significant link between this method of filtration and remediating uranium, we propose this as a method of filtration available on a smaller scale for use by communities that do not wish to utilize water from mechanical filtration, such as the Kanchan Arsenic Filter (KAF), anion exchange resin (AER) filter, or Zero Valent Iron (ZVI) filter, or whose water does not exceed uranium MCL levels.

Biofiltration uses hyperaccumulators, or plants that are capable of growing in soils with heavy metals and absorbing these metals through their roots to remove contaminants (Peer, 2005). We have determined that Typha Latifolia, or cattails, are the best plant option for the Navajo Nation because they are native to North America, including the Navajo Nation, and because they are effective in removing arsenic from water. Although they often live in wet climates, they have also been used in the Navajo Nation (B. Francis, personal communication, Sept. 14 2018). They can reduce the concentrations of arsenic by 89% (Markham, 2009) and also aid in the desalination of water (Janen, 2010).

The diagram below outlines the procedure by which water is purified within a bioswale. Water from the pipe travels through rocks and is poured onto plants, which are usually specialized species of hyperaccumulator plants. These plants soak up certain contaminants in the water, leaving the water that leaches down into the sandy loam layer cleaner. The geotextile fabric filters out mulch and loam particles from the water, and the water exits the drain pipe. 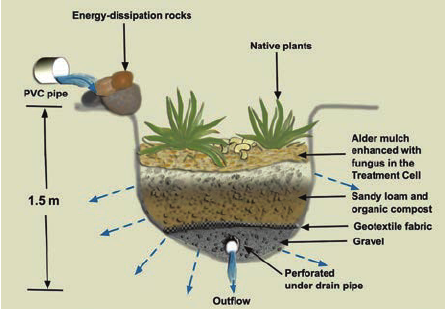 Compared to other filtration systems such as reverse osmosis, biofiltration is relatively cheap. The cost of each bioswale is the sum of the price of the plants used in the bioswale, installation cost, and maintenance fee. The installation cost includes pipe material, construction, and required land.

Cattails are very cheap, costing less than $6 per 100 plants on Pond Megastore and less than $2 per 50 seeds from Seedville on Amazon, so the cost of plants used in the bioswale will be very small.

We determined the following criteria in predicting places in the Navajo Nation where biofiltration would work best and be the most helpful for citizens.

Based on the above criteria, using GIS mapping of abandoned uranium wells, density of wells, and population density, as well as population data (U.S. Census Bureau, 2010) and a map of rivers and lakes in the Navajo Nation (Gulch, 2016), we identified a few areas that we believe biofiltration would be most readily-implemented and impactful in. Within these listed areas, bioswales would be most feasible closest to the body of water or connected to a pre-existing well and most impactful for more densely populated areas along the water or the most-used wells.

Because biofiltration uses natural resources, we believe that many Diné communities are more likely to embrace biofiltration than other industrial types of filtration such as Kanchan Arsenic Filter (KAF), Anion Exchange Resin Filter, or Zero Valent Iron (ZVI) Filter. Also, Diné have practiced traditional farming since the 1600s, (The Post-Pueblo Period: A.D. 1300 to Late 1700s) and created their own bioswales in the past (B. Francis, personal communication, Sept. 14, 2018) suggesting their willingness to implement this solution.